On Sunday May the 7th, the A10 Corridor Cycle campaign held its annual awareness ride.

This year there was only one ride from Trumpington Park & Ride. There has been great progress on this section of the path, but no-one felt able to organise a ride from the Royston end. The situation is so dire south of Melbourn with traffic, that no one feels confident enough to organise an open ride at this end. When you travel the entire route, the South end feels abandoned, effectively generations apart compared to the new infrastructure that is place in areas to the North.

Efforts have been made by some members recently to improve the situation, but there is only so much individuals can do with a problem on an industrial scale.

Having said that some good infrastructure has been put in to the north. With this infrastructure, people of all ages can travel along most of the route in peace.

A large group of riders left Trumpington at about 10.15 and travelled through Trumpington Meadows, which is maturing and looking delightful on a sunny day. People do remark that on a dark night in the winter, they simple won’t use such an isolated route, but on a nice sunny day it makes a good leisure route with a roughly 50-50 split between people using it and choosing to stay on the path next to the A10.

The next section is down through Harston. This section is set to see improvement works beginning in the summer, which we welcome.

The awareness ride was covered by ITV. Some of those tiny children cycled all the way, if you think it’s too far for a grown adult to cycle. Read their article here.

The ride was also covered by the Cambridge News. Read the article here. 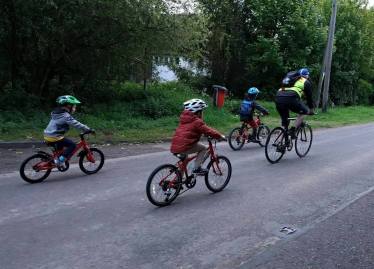 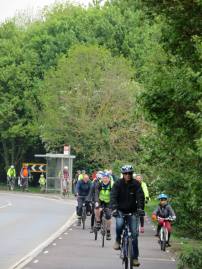 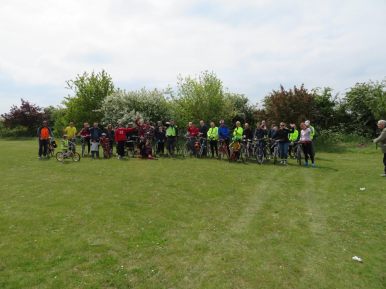 Once south of Harston, you are now on the new paths all the way to Melbourn, which are a joy to use, especially on a dark and windy night, which when you find out how good infrastructure really is. The group managed to progress at a steady pace. We used the new crossing islands in the A10 to cross and settled in for a social an cake at Phillimore Garden Centre. Many thanks to them for hosting us. A group travelled on an unofficial ride to explore further through Melbourn. Hopefully more of that will appear later.