Melbourn Village College student and Royston resident Sambor Czarnawski-Iliev attended a meeting of the Greater Cambridge Partnership Board, to help make the case for a walk/cycle link between Melbourn and Royston. He had conducted a survey of Year 9 classmates, which indicated support for the link, and handed out copies of the results to the Board. 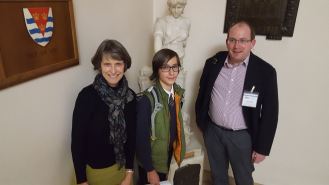 Also speaking in favour of the link were Mike Prior-Jones, who works at Melbourn Science Park, and A10 Corridor Cycling Campaign Chair Susan van de Ven.

All three of us would like to thank the Board for truly listening to what we had to say, and for agreeing to ask officers to produce a business case for the scheme, so that it can be properly considered. We look forward to listening to that consideration at the Board’s next meeting on February 8.

Here are Sambor’s reflections about the value of taking part in the meeting – and playing a small part in the Board’s decision-making process.

Having myself and Mike was truly helpful, I remind the board that this is all about the people, and the future of the people, I also show how this is so important to the people, as I myself have gotten involved.

Susan also, during the miserable time in which we waited, noted down whatever there was of importance, which could be mentioned to the board. And, as it turned out, there were quite a lot of subjects of importance. It turned out that we were basically addressing multiple problems of the South Cambridgeshire City Council. And we’re asking for much less money than other projects as well; while we’re asking for 1 million, another project was asking for between 75 to 146 million.

Michael Prior-Jones’s list of companies, businesses and people who have funded our project also showed how much support there is for the campaign, furthering how worthwhile it is to support our project. The fact that within the survey results I kept the unfavorable singular result, which I concluded within my summary to be a troll, proved to the board that this was definitely a genuine piece pf work, completed by the normal public. It also further made our case stuck in their heads, as it truly stood out.

Due to all this we truly made an impact on the board, and they began having a discussion not seen before. They agreed to fully actually do something, and this whole shenanigan will definitely stick within their minds, and not be forgotten or replaced by another project.